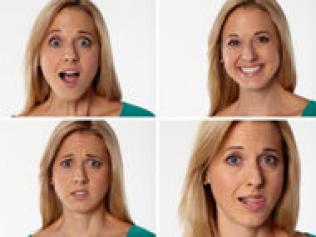 Can't figure someone out? Then you're probably not tuning in to her body language. We all speak without saying a word-you just need to know what to look for. Photo by: Phillip Friedman/Woman's Day

Have you ever been talking to someone when suddenly she crosses her arms? In that moment, the whole vibe of your conversation shifts. You start to feel a little defensive because you think that's how she's feeling. But are you reading her right, or just jumping to conclusions? The truth is, if you misread people's body language-or worse, don't pick up on it at all-you're missing more than you think.

Learn how to use body language to your benefit.

"Up to 80% of what we communicate is nonverbal," says Joe Navarro, a former FBI agent turned nonverbal communication expert and author of What Every Body Is Saying. That means every gesture, look, mouth twitch, eyebrow raise, even the way we stand sends a message. No wonder researchers have been studying the science of body language for decades-and what they've found can help you communicate more effectively.

We relate to people in three ways: verbally (with words), vocally (tone of voice), and visually (body language), says Albert Mehrabian, PhD, emeritus professor of psychology at UCLA and author of Silent Messages. But the three V's don't always line up. Think about someone who tries to put a good face on during a difficult time in her life. She may tell you she's doing fine, but she frowns a bit when she says it. That's why body language matters so much: It tells the truth, even when our words lie, according to Dr. Mehrabian. "If there's an inconsistency between the verbal, vocal and visual, our words give off the least information," he says. "Our facial expressions play the greatest role."

The tricky part is noticing them in the first place. Of the thousands of facial expressions we make each day, some flash by so fast (in less than 1/25th of a second) that they barely have time to register, according to psychologist Paul Ekman, PhD, co-editor of What The Face Reveals, who pioneered research on these fleeting involuntary shows of emotion, which he dubbed micro expressions. But if you keep an eye out, over time you'll start to catch some of these blink-and-you'll-miss-it moments.

How do you learn to pick up on telltale facial expressions? Start by doing what national poker champion Annie Duke does: Constantly study people's faces. "Poker players are good at hiding nonverbal cues," she says. "But I always watch them very closely, and if I see them blinking fast, licking their lips or flashing a quick grimace before they smile, chances are they're bluffing."

Find out 4 tricks to communicating with your husband.

You can catch even the most fleeting facial "tell," but it takes a lot of practice, says John Gottman, PhD, emeritus professor of psychology at the University of Washington and cofounder of The Gottman Institute, who has studied body language in his research on marriage and relationships. The key? Watch the mouth. "That's where most of our nonverbal information comes from," he explains. Say a waitress twitches her lip to one side when you order an inexpensive dish instead of a pricey one: It's a sign of contempt because she knows she'll be getting less of a tip. Or say you give a pal a gift she doesn't like. She may smile, but her lips will be the only thing on her face to move. If it were a genuine smile, her eyes would crinkle at the corners and the apples of her cheeks would lift, too. And take wide eyes: While they can convey surprise or fear, the mouth is the real determining factor that helps you tell the difference. The mouth drops open when we're surprised, but pulls back when we're scared.

TUNING IN TO BODY TALK

While the face reveals key clues, the body fills in the rest of the story. The starting point? The feet. "They're the most honest part of the body and really let you know how someone feels about you," says Navarro. Whether you're sitting or standing, if a person's feet are pointed toward you, that's a signal that she enjoys your company and wants to stick around. But if her feet are angled away from you, odds are she'd rather be somewhere else.

See 45 Secrets For Your Best Body Ever.

As for the rest of the body, keep in mind that some gestures don't necessarily mean what you think they do. Take crossed arms. For years, we've been told that's a clear sign of defensiveness. "But it's not if the person's arms are lightly folded across her chest rather than tightly," says Navarro. She may simply not know what to do with her arms. "However, most people cross them for self-comfort-they're giving themselves a hug, in effect," he explains.

But some body moves are indeed signs of negativity. If you notice a person's hand balled into a fist with the thumb inside while he's staring down, he's feeling defensive. "Or if your husband turns his belly away from you, even if he's still looking your way," says Navarro, "he's letting you know that he doesn't like what you just said."

When it comes to your own body language, don't worry about trying to fine-tune your every movement. "Behavior patterns associated with temperament or personality are at least 50% genetically determined, and are difficult to change," explains Dr. Mehrabian. Say you're naturally high-strung. Getting your body language to read calm and cool may be tough. "But you can learn to change some of the nonverbal cues you send out," he adds.

Get good advice for dealing with annoying people.

And it's well worth the effort. "We have 4 to 8 seconds to make a good first impression," says Navarro. "The goal in that short amount of time should be to create psychological comfort." In fact, a 2011 University of California, Berkeley, study found that people determine within seconds if someone is trustworthy, kind or compassionate based on how often he or she makes eye contact, smiles, nods while listening, and displays an open body posture.

So fine-tune where you can. An easy place to start: mirroring. For instance, take a beat to assess someone's handshake and match it, using the same strength or gentleness as the other person.

Other ways to put people at ease: Pay attention to your proximity and posture. In one-on-one situations, stand or sit at a slight angle to the person, but not too close. "Research shows that people feel more comfortable when you position yourself this way because it's a less confrontational posture," says Navarro. Make eye contact, too, but don't stare. And pay attention to what the other person's eyes are doing: Are they slightly lowered? Does she hold your gaze briefly or for several seconds before looking away? Match your look to hers, as you would with a handshake. With these few tweaks, you'll make a good impression without saying a word.