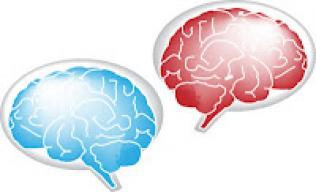 How do bilinguals avoid confusing the two languages they speak? One idea is that there's a kind of language switch that inhibits one tongue whilst the other is in use. A new investigation by researchers in Finland suggests that such a system probably applies to what they call "Dominant Bilinguals", who learned a mother tongue first before acquiring a second language later in life. But they don't think such a system exists for what they call "Balanced Bilinguals", who grew up speaking two languages. In the brains of Balanced Bilinguals, the researchers say, the two languages seem to be fully intertwined.

Peltola's team focused on two sounds that are categorised as two different vowels in Finnish, but which are seen as the same vowel in Swedish. The main task of their bilingual participants was to listen to pairs of sounds and judge whether they were the same vowel sound or if one was different from the other. Crucially, the participants performed this test twice, a week apart: once in Swedish and once in Finnish. Their brains were scanned with EEG throughout.

Two types of participant took part: one group of 12 Balanced Bilinguals had starting acquiring Finnish and Swedish simultaneously from birth at home; the other group of Dominant Bilinguals were Finnish university students studying Swedish - they'd been raised with Finnish as their mother tongue, then started learning Swedish at age 12 and had developed an extremely high proficiency in the language.

An initial finding was that the Balanced Bilinguals were slower and less systematic in where they located the Finnish vowel boundaries, suggesting that they suffered interference from the Swedish interpretation of sounds. This was supported by the EEG recordings. Confronted with two different vowel sounds in Finnish, an early spike of negative electrical activity from the brain (known as the mismatch negativity; MMN), which is associated with the perception of a different vowel category, was slower to peak in the brains of the Balanced Bilinguals.

Moreover, the amplitude of this MMN, in response to the same pair of sounds, varied dramatically in the Dominant Bilinguals, depending on whether they were performing the task in Swedish or Finnish. This suggests their brains were treating the same sounds differently depending on which language "mode" they were in. By contrast, for Balanced Bilinguals, this early spike of electrical activity to the vowel sounds was the same in both language contexts. This suggests that early on ("pre-attentively" was the researchers' term), their brains were treating the sounds the same, regardless of which language they were supposed to be speaking.

According to Peltola and her colleagues, all this suggests that there are two ways for bilingualism to operate in the brain. Dominant Bilinguals seem to be able to "switch off" irrelevant sounds in accordance with the language they're currently using, even if those sounds are recognised by their more dominant, mother tongue. "This implies the existence of two functionally separable phonological systems," the researchers said. In contrast, Balanced Bilinguals don't keep their two languages apart. Their language systems "are so intertwined," the researchers said, "that exemplars from both inventories are automatically activated regardless of language context."

Taken altogether, the researchers said this shows that "Balanced Bilinguals have one uniform speech sound system for the processing of their two maternal languages [mother tongues], whereas Dominant Bilinguals have two separate phonological inventories." A question for future research is whether Dominant Bilinguals keep their two systems separate via inhibitory processes or even via distinct cortical areas supporting the two languages.