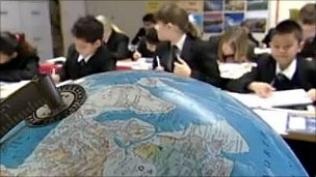 Every child aged five or over should learn a foreign language, Education Secretary Michael Gove has said.

He told the Guardian that almost every other advanced country teaches a foreign language from that age, and the UK should set itself the same target.

Mr Gove vowed to "pull every lever" to make that happen, including encouraging schools to extend the working day.

The National Union of Teachers said any lessons must be well integrated into the whole primary curriculum.

But he also pointed out that some schools in deprived areas were already teaching five year olds Spanish - and that should be possible to replicate nationwide.

"If we pull all the levers, change teacher training... get schools that have language potential to take over under-performing schools, and we move the curriculum review in the right direction, then we can move towards the goal," he said.

"Learning a foreign language, and the culture that goes with it, is one of the most useful things we can do to broaden the empathy and imaginative sympathy and cultural outlook of children."

"It is literally the case that learning languages makes you smarter. The neural networks in the brain strengthen as a result of language learning."

He said one of the problems was that children were not in school long enough, and called on more head teachers to follow the example of academies and extend the day.

NUT general secretary Christine Blower said there was an advantage to learning an addition language at an early age.

But she added: "Many schools of course are already providing a language learning experience for children at primary level.

"There is a need to ensure this teaching is provided by qualified teachers and is well integrated into the whole primary curriculum."

The interview came on the eve of the Conservative Party conference in Manchester, which Mr Gove is due to address on Tuesday.