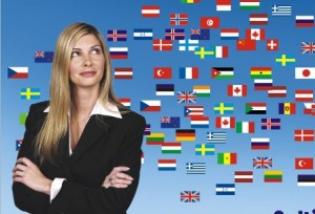 Which language to learn today to benefit in future and make a successful career? Professors of leading educational institutions believe that in the next 10 years the most useful languages in international business will be English, Spanish, Chinese and Arabic.

English is easy and logical – it’s clear. Today it dominates thanks to a big role of Internet. As a global language English strongly intrudes into all the national languages​​by means of mass communication.This situation is not going to change in the next years as far as English remains international business language.

A decrease in demand for European languages is an undeniable trend. There is a dramatic decline in the number of learners of Italian and German. Nevertheless we can’t ascertain their global reduction in the total volume of teaching.

At the same time the interest in Chinese language is growing increasingly. It’s expected that in 50 years Chinese will become the most important language of international business. China experiences a significant growth not only in population but also in its economic wealth. It’s predicted that China will become dominant in global economy, leaving behind the U.S. and other leading countries.

In Europe a boom in Spanish is predicted in few years, which has to do with demographic crisis. As the crisis will get deeper, a demand for the specialists who know Spanish will increase. It’s clear as far as the population in Europe is expected to grow as a result of immigration from China and Latin America.

There is an increasing interest in Arabic among students. It’s not surprising since it is currently spoken in more than 30 countries around the world…

After all, whatever language you choose to learn knowledge of a second language gives you additional opportunities to find a job with higher salary and to build a successful career in international business.